Call Us Now!
The jig is up, as they say, for those who may stand accused of sexual harassment in the workplace. That’s because the whole #MeToo and #TimesUp movements have emboldened victims of workplace sexual harassment and even sexual assaults to come forward, finger their assailants, and in some cases press charges, if the statute of limitations hasn’t run out on the crimes they allege occurred that is.

Not only have Hollywood stars and high-profile celebrities come forward to unleash their anger and disgust at their assailants, but Congress just kicked in a staggering $16 million in the Omnibus bill to help fight workplace sexual harassment and related crimes. This money was put into the Equal Employment Opportunity Commission’s (EEOC) budget to help fight sexual harassment and discrimination in the workplace.

“Going forward, I will ensure that we use these additional funds judiciously to enhance the agency’s work — especially as to harassment prevention,” said EEOC Chairperson Victoria Lipnic.1

How Will The EEOC Use the $16 Million? 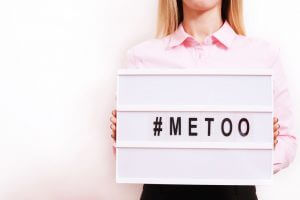 The $16 million increase for the EEOC’s budge came as a pleasant surprise to officials, who plan to use the new funds in several different ways, including:

What Else Have We Learned From The #MeToo & #TimesUp Movement?

Well, for starters, it has shined a light on the ugly secrets that have been hiding in plain sight in many workplaces. The following are some facts, figures, and interesting bits of information that have surfaced as a result of the #MeToo and #TimesUp movements:2

“It’s thanks to all the news cycles,” said Neil Hooper, STOPit’s chief revenue officer. “People are awakening to the fact that you can get ahead of these issues before they become claims.”

Were you wrongly accused of sexual harassment or sexual assault in the workplace? Let us take a look at the substance of the accuser’s claims and help bring you the justice and redemption you deserve. Contact our Colorado Springs Sex Crime Defense Attorney at Kohn Law Firm to help assess the charges brought against you and build the strongest defense case possible. For a free, no-obligation consultation, call today at (719) 419-9667 or email us using the form at the top of this page.

2“Sexual Harassment Inc: How The #MeToo Movement Is Sparking A Wave Of Start-Ups” published in The Washington Post, March 2018.